Self hosting of SignalR using Owin

We know that SignalR is the Microsoft’s push solution in web application. Prior to Owin the concept was like that. Introduction of Owin has changed the scenario. Now SignalR can able to host with some other stand alone application.  It’s not needed to configure SignalR hub within IIS server.  We know that OWIN(Open Web Interface for .NET) which has introduced by Microsoft is a specification which sits between Web server and Web application.

The reason to introduce Owin is to reduce the dependency of Web application on Web Server.  For example, if we implement some Owin specification (most popular is KATANA) in our application then may be our application can able to run in any server irrespective of IIS.

The Owin has given facility of self hosting which we can adapt to host out SignalR hub application in single stand alone process. The process may be one exe or Windows service or something else.

Why self hosting?
If you have concept of SignalR 1.0 and implemented in your web application then you may ask the question. We have hosted SignalR in IIS server along with web application, that’s easy and fine. Here are few advantage of self hosting.

So, those might be valid reason where self hosting may come in picture. So, let’s implement example of self hosting and access SignalR hub from other application.

Let’s take one console application and install below packages from nugget package manager. The below package is to install SignalR in self hosting environment.

Now, as the hosting environment will be stand alone application and client will be calling the application from some other domain, we have to enable Cross Origin Resource Shairing(CORS) in application. Here is the package for it.

Once you install both the packages, you should see those references in application. 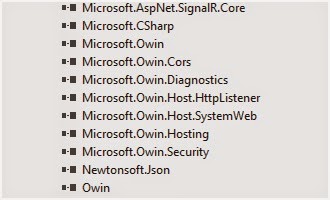 The AllowAll property indicates that we want to allow all domains to request to the SignalR hub.  This is both pros and cons. If we allow all domains then many applications from different domain can able to consume the SignalR hub, this is the advantage and at the same time we have to implement strong access policy and security for various domains.

Now, we will implement SignalR hub where we will define the hub class and the function which will broadcast the message across client. Here is simple implementation.

It’s too simple, the sayHello() function will invoke sendMessage() function which is defined in client end of SignalR subscriber.

Now , we have to host the application in some endpoint .  Within Main() function we have defined the url and arbitrary port where SignalR hub will host.

Once we run the application, we will see below screen.

Here we have implemented one simple client which will consume SignalR hub. Have a look on below code.

And once we run the application, we will see below output. The message has come from hub function which we have hosted in console application.

Posted by testsouravkayal at 12:22 PM

Email ThisBlogThis!Share to TwitterShare to FacebookShare to Pinterest
Labels: SignalR